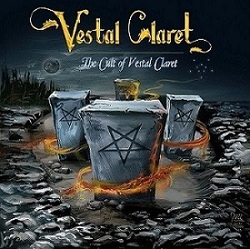 Phil Swanson has been in a ton of doom-infused traditional retro metal projects from Hour Of 13 to Seamount to Briton Rites as well as Atlantean Kodex and Nightbitch among others, and his voice is very distinct yet sharing more than a passing resemblance to the almighty Ozzy at the same time. Well here he is back with Vestal Claret for their latest offering of dark and occult madness.

Not truly a doom project, Vestal Claret still has a bit of a doom feel to it, but it is definitely more of a traditional metal offering with heavy guitars and bass to set a proper, dark atmosphere. I must say this is some of the best vocals that he has done in awhile and the rest of the music fits perfectly with his vocals.

The production is just enough to give the sound the push it needs to really work in the modern day metal scene, yet not overblown, again this only adds to the music here. Very little I can fault on this CD to be honest.

Tracks such as Never Say No Again, Three And Three Are Six, Great Goat God, The Demon And The Deceiver and Piece Of Meat are chock full of great vocals, simple yet effective riffing, solid kitwork and vibrant bass lines all delivered with a smoldering atmosphere.

Things bog down a bit with the very lengthy (seventeen plus minute) epic of Black Priest. Unfortunately that is just a bit too long to really get into on a normal listen and maybe if anything it should be pushed to the end of the track so it doesn't dissuade a listener who isn't sold on it's length from going further on the CD without hitting the fast forward button. This would be a shame as there is much to enjoy at the taile end of this wicked little number as well with the Sabbath cover Who Are You and the excellent closer, The Stranger!

If you want your metal a bit on the dark side, then look no further than this delightful romp into the darkness!