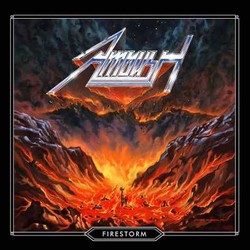 My first thought when the first track of this CD started was Judas Priest. Even Oskar Jacobsson's vocals are a bit reminiscent of Rob Halfords in some areas. Don't get me wrong, this is not a Priest clone band but it is the closest to Priest speedy goodness that the new wave of traditional metal has give us thus far. Ambush is a perfect addition to the burgeoning ranks of traditionalists that have been cropping up throughout the metal scene of late, right along such standouts as Bullet, Enforcer, Cauldron and Striker among others.

Let's backtrack a bit and let me introduce you to the latest of many many fantastic bands that has come out of Sweden of late. Firestorm is Ambush's first album and my god did they start out with a bang. This perfectly titled little gem is a phenomenal debut and goes a long way to capturing that classic 80's vibe. The production might be a hair tighter than what you would expect from the era overall, but the heart and the fire (no pun intended) are both there in plenty!

The first track on the album is the title track and after just a few seconds of sonic sweetness you realize right off the bat that you discovered something good. After one speedy number after another you realize that these guys are the real deal. Ambush, Hellbound, Don't Shoot (Let 'Em Burn) all crank off one after another and by this time your head is either bouncing or you better check yourself into the hospital because you are missing a pulse!

Not much I can say other than you better watch out for the Firestorm, lest you go up in smoke!!!