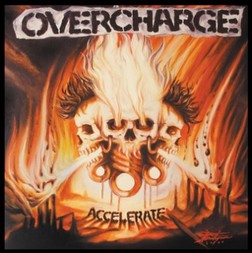 
Overcharge are a newer band out of Italy with a previous EP that came out last year. They wear their influences on their sleeves, and there is no question they are huge fans of Motorhead and they even use a power trio with the bassist doubling as the singer. Sound familiar? The music is a very fast Speed metal punk hybrid which again is very much Motorhead. They also are apparently influenced by early Metallica, but that really pales in comparison.

The singer tries very hard to be Lemmy, but his vocals are even more gruff and angry and to be honest they really come across as a mix between speedy punk and black metal either by intention or not and they really do not work on this album. If he were to try to sing his own style rather than try to sound like someone else I think the band would be better off here. I have heard many clone bands over the years, some good and some not so much, but generally that type of music wears out fast. Bands need to really grab their own identity in order to retain any type of following.

The production is very raw too, though I am guessing that is intentional to further give the band the speed punk vibe. Again it just screams clone at me a bit too much.

There are a couple of tracks on here that are pretty decent and the guys can write music, but they really need to expand there sound a bit in order to be taken seriously. For me I think I would just put in a Motorhead CD and be done with it.