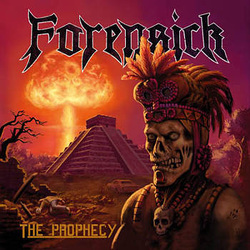 Forensick have been together for a few years now and they have released one full length CD prior to The Prophecy, which I need to track down and check out so this is my first experience with this band.

Their style of metal is pretty straight forward with some power elements mixed in. This isn't really one of those throwback sounds of metal which is common place, nor is it anything overly modern either. Basically they don't really try to emulate anyone and at the same time you get a sense of the usual influences here and there. In other words they have a pretty fresh sound but are firmly entrenched in traditional metal if that makes any sense.

From the beginning double dose of Hero Of The Day and Doomsday Machine you quickly get an idea of what to expect on this CD. Good riffs, strong vocals with some intense drumming backing it up. Tobias Hubner has a solid range of vocals with an occasional tough bite to it, but he laces in a lot of higher pitched shrieks that sound really solid. The guitar leads are often times Maiden influenced here and though the band isn't extremely heavy they definitely give you the feeling of metal all the way through.

There are not much negatives to report on this CD as I was really impressed all the way through on this. The production is really solid and the songs never get boring or forced at any point. Time Of Resistance, The Prophecy, New Reality, When The War Begins and Dark Secret all keep you engrossed in the album and the next thing you know it's all over. I definitely will need to double back and check out their 2012 self-titled offering.

The Prophecy has arrived and I foresee much success to be had by these German metalheads!