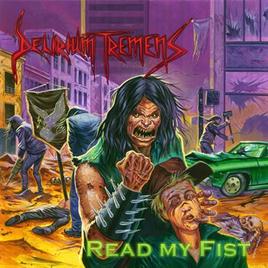 
Leave it to a German band to come screaming onto the scene with some really nice old-school thrash! With some Sodom, Kreator and Tankard in their blood, these guys have been slowly making some waves as a cult band for a few years now and though they have been around for nearly 20 years they seem to be finally getting some due recognition.

The thrash on this album is quite good with the typical gang vocals, rapid fire guitars, massed out drumming and give no shit attitude. The artwork is classic old school thrash as is the subject matter and tongue in cheek humor involved. My biggest irritation however is the production is a bit flat. The vocals are a bit lost in the mix at times and I know they were most likely going for an old school sound, it can still sound old school with a bit slicker production. Not looking for epic power prog production or anything, just something more competitive with what is available in the modern musical era.

With such anthems as Rough Ride, Read My Fist and We'll Be Drunk Forever to lead the way and other obviously thrashy tunes as Thrash And Be Trashed, Backyard Wrestling, The Kids Kick Ass and Rolling Thunder, you can get a very good idea of what these guys are all about. Full on thrashing with heads banging and fists pumping, just crank the damn volume and get the circle going already!

Again nothing new and nothing groundbreaking but just good solid fun! Mosh on!!