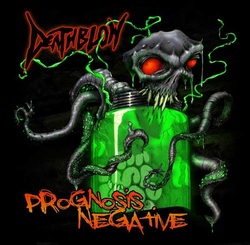 
Hailing from the not-so-metal confines of Utah comes this young thrashy upstart of a band and their first offering to the metal masses with Prognosis Negative. My first impressions on the CD are that it is a very decent album overall with a definite homage to the 80s thrash era and I did find my head bobbing throughout the CD.

There are a number of good moments to be found here as the basics are all there, with the full speed aggression, chugging riffs and shouted vocals. Songs such as Riddled With Tumors, Habit Of Force, Prophecies Of Doom and Masters Of War are proof positive this band has the chops that are needed to get the job done and they are indeed a welcome addition to the metal underground!

In fact virtually every song is fun to listen to during the time it is playing, though they don't exactly stay in my memory very long, that is a sign of a band having all the potential but needing to grow a bit with their songwriting abilities, all of which comes with experience and a growing comfort and confidence which just takes a bit of time. Everyone knows the part they play as far as their instruments go and the vocalist has a very good sound for the music as he is able to hit the notes well and sing a very thrashy style yet still be understood as he sings (and he can hit the occasional scream nicely too!).

There are definitely some sweet sounds to be had, some really nice riffs or vocal pieces and everything you would expect from a good thrash album (and the production is pretty damn decent as well), but there is also a lack of anything new or career defining either. This is definitely a solid starter album and one to get themselves placed on the metallic map, but it is more a foundation. The next step is to build upon the foundation and see what kind of architecture they can build!