ChainReAction - A Game Between Good And Evil 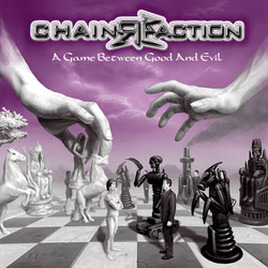 
Wow! I don't know where she has been hiding, but Conny Bethke is another powerful femaile voice on the metal scene. I have a soft spot for female vocals in general and I am not talking about the goth sounding beauty and the beast type vocals that are all over the place. I like my Joan Jett meets Doro meets Pat Benatar rock-chick vocals and some of my favorites would be the aforementioned Queen Of Metal in Doro as well as Nina Osegueda of A Sound Of Thunder and Benedictum's Veronical Freeman among others.

You can't have a successful band without there being more to the music than some killer pipes leading the way, however and ChainReAction can back it up with some really excellent double bass drums, layered duo axes with some pretty sick traditional metal riffing and solos with some well done, if nothing earth-shattering in the song writing areas.

Tracks such as Have No Fear, Angels Never Die, Stolen Fire, Warrior and Straight From Hell spearhead the metal onslaught and really get you into the album, while the ballad Dreaming really brings out the Doro/Benatar elements in Bethke's vocals and really show she can not only rock but really has a beautiful and captivating voice which oozes some strong emotions! I could see her singing in front of a packed crowd with their lighters (or lighter apps on their iphones) held high in the air with this track!

Traditional metal is alive and well and scattered all over the landscape, but as usual there are some really killer bands in Germany that wave the traditional flag such as Black Hawk and Backwater among others. You can now add ChainReAction to that growing list!