Game Over - Burst Into The Quiet 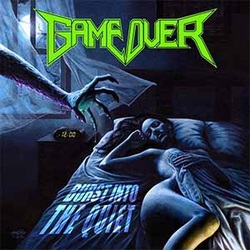 One glance at the album cover and I had the inklings that this would be a pleasant old school thrash romp through the Bay Area. After the first track kicked in, I realized my opinions were well-founded. This is the second full length album by this six year old Italian thrash band (the band is six years old, not the members of course).

You can pretty much tell the band's influences pretty well here. I get a lot of Overkill, Exodus and the like here with maybe a sprinkling of Anthrax as well. The thrash tropes are all in place with the chugging riffing, shouted vocals all done on a high octane energy level with the lyrical content you would expect as well. Violence, Horror, Social Issues, Pop Culture References, etc. you get the picture.

The CD has a solid thrash-level production and the songs blaze through rather quickly as you find yourself pumping your fist, banging your head and bouncing your foot along to the whole album, then as quickly as it came in it seems it was over with. After assaulting you with such gems as Master Of Control, Seven Doors To Hell, C.H.U.C.K., No More and Nuke 'Em High, you end up well satisfied and become an instant fan of these Italian moshers.

Game Over? I hope not, let's hope that the Game is just getting started!!