Lipshok - The Soul Of A Broken Mind 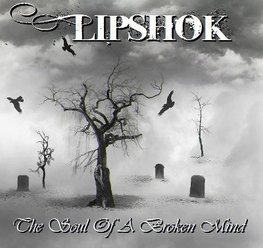 Lipshok is an interesting band out of Hayward, California and showcases the vocals of Scarlett Dark in a tapestry wrapped up with symphonic melodic metal and a strong dose of goth strappins. There is no doubt she has a very strong voice and she can sing with both a very gentle and sooth voice such as in Just The One You Love, but there is also a rockier tone to her voice that comes out in Evil Lost (actually we see both sides of her vocals here).

Overall the music doesn't have as much bite as I would like personally. It is all too safe and gentle for the most part. The band focuses on the mellow side of the frame and comes across a bit on the sleepy side. The musicianship is fine and the production is top notch but I would have liked to seen a bit more in the riff category to drive the music a bit more and showcase what Scarlett can do with a faster tempo instead of it being merely hinted at (more of It's Over Now and not as much Against Me for example). Even goth or symphonic metal can be amped up a bit without losing it's identity.

I think if they would've kept a couple rocking tracks together instead of spreading them out, it would've done a bit more into getting me to identify with the music more. But I think a lot of that is just personal preference. Scarlett has a strong voice and that is what is focused on here.

Overall not a bad listen and there is no questioning the talent in this band, just not quite enough metal in the symphony. If you are into the melodic side of metal and like female vocals then you will most likely get into this.