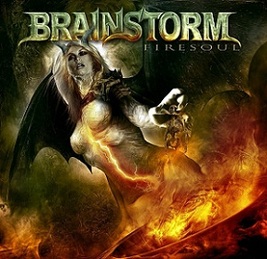 Brainstorm has long been a favorite of mine and when a promo copy of the new CD found it's way to me I was really interested in checking it out. These Germans have put together one outstanding album after another and now they have given us their tenth studio album!

When I initially hit play I was a bit surprised as the I expected them to come out of the gates with a real scorcher to grab my attention and like Primal Fear has done they went a bit of a different direction than I expected as far as opening numbers are concerned. And although Erased By The Dark is a solid track, it has really yet to catch me as some of the other tracks have done so far.

The scorchers are here as shown by such tracks as Firesoul and Shadowseeker and there is a ton of melody shown as well in tracks like Recall The Real and Descendants Of The Fire, so the tradition that Brainstorm has given us in the past is all intact.

This may not be the best Brainstorm album I have ever heard and maybe I was hoping for a bit more, but it is still very solid and a very enjoyable power metal album!! Definitely better than what many have done of late!