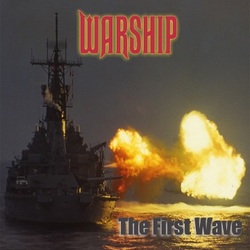 Warship as a band has been around for about a decade now and this is their first and so far only official album. I just stumbled upon the band recently so I am not sure how well known they are yet in their homeland of Greece, but I do know they play a pretty traditional style of metal with a nautical theme (hence the band name).

The music on the CD is not half-bad and the songwriting is pretty solid sounding, but the production on this CD is rather weak and muddled. The vocals in particular do not stand out very well and it is as if the mic was too far away from the vocalist. It's too bad as from what I could tell his vocals were pretty good, just muffled too much to really get into too much.

The guitars definitely are the feature of the CD that really stick out for me with some solid riffing that is contagious and fun and it is all backed up by some pretty mean drums as well! I am hoping the band is able to put out something new in the near future with a stepped up production as I think these guys have something to offer us if given the proper setup!

Tracks such as Pirates Of The Seven Seas, Fight Or Die and Fuck Them All are really good cuts that suffer from the production of the CD. Not saying this to bury the band by any means as I know that it's tough financially to put out an album and with no label support behind you many bands can never even get this far. These guys deserve the support and I am hoping they are able to take it to the next level!