Metalsteel - This Is Your Revelation 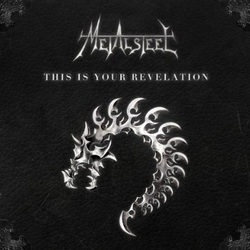 Now here we have the fifth full length album from this band from Slovenia who have been together since 1999. Only the drummer (Dasa Trampus has not been there from the beginning and she joined in '01). Now for the interesting part...they are all in their 20's I believe and at least one or two members were in their pre-teens when they formed the band!!

As for the music itself, this is a very traditional straight up metal band with a bit of thrash, a bit of hard rock, maybe even a sprinkling of glam here and there as well. They have a lot of bite in their music, yet can really bring in the softer and melodic side as well. The music has a lot of groovy riffing interlaced with some bombastic drumming and really well-done vocals. Not too shabby from a land not necessarily known for it's metal output.

The band puts out some really good fist-pumpers such as New Way Of Thinking and This Is Your Revelation and sprinkle in some more hard rock numbers such as Taboo and Narcissus and can even get a bit folksy such as Call Off The War, showing they have a lot of experience together and have become some pretty strong songwriters and musicians for their relatively young age. With such experience together already as a band I shudder to think what they can do if they are able to keep their momentum going in the future!!

I don't know why these guys have not been on my radar before and I don't know if this offering has seen them change their style much, but I definitely intend to check out their back catalog and compare. Definitely a band to keep a closer eye on and a release that will garner quite a bit more attention before all is said and done.

This definitely WAS a revelation for me and I am very much the richer because of it!!