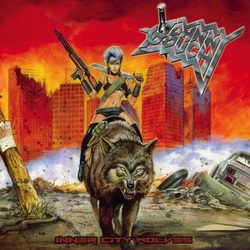 
Alright before we even get to the music let's talk about the album cover for a minute. What is more metal than a scantily clad babe with an assault rifle riding a giant dire wolf in a post apocalyptic setting? The visual alone of this album is worth the price of admission! Okay now that we got that out of the way let's see what else this CD offers up. Johnny Touch is a retro-traditional speed metal band out of Australia that features several members who have been in a number of other regional bands prior to the forming of this unholy union about six years hence. After a demo and a couple of splits, this is their first full on offering to the masses.

Let me get rid of one of the negatives here first. The production is a bit muddy here with the vocals being a bit low in the mix and overall it just isn't as crisp as I would have liked, though I am guessing it was recorded on the usual shoestring budget with time constraints etc., so I am willing to slide if the song quality stands up on its own. So we will focus on that aspect of the release. Fortunately for the boys in Johnny Touch the music does make up for the production for the most part. There are a couple nuances here and there that I think could have been tweaked, maybe a couple more guitar riffs thrown in or a gang vocal or two added in to give the songs a bit more pop, but overall some pretty good stuff all around.

The CD starts off with a track which just doesn't pop out at me and is therefore the appropriately titled It's Alright, but the real fun begins with The Metal Embrace, which really kicks up a notch. Lady Stutter is an odd seven minute long track that doesn't quite know if it wants to be a ballad or a rocker, but is still pretty cool though it takes a couple listens to appreciate its subtle charms. Dishonourable Discharge continues the high energy assault of the album, though the band really never takes off in a true speed energy. End Of Daze is likewise a cool track with some haunting whispered vocals to kick it off before kicking in at a quicker clip, showing the band has a few tricks up it's creative sleeves. Bitch Of A Son is probably the true standout on the CD and a song that grabs you instantly.

This CD is overall not necessarily an all out scorcher, but it is more of a diamond in the rough. It is definitely worth checking out but may take you a couple of go throughs before you are hooked.