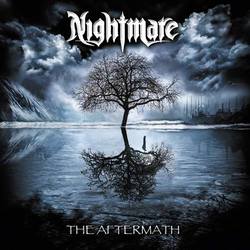 France is not exactly known as one of the true heavyweights on the Power Metal scene, but one can not overlook the accomplishments of this veteran powerhouse unit. Nightmare has been on the scene for quite a few years now and this is their ninth full length studio effort. They may have fallen a bit short from the frontline of metal bands, but they have definitely had their moments to shine and have put together some pretty wicked metal slabs.

The Aftermath is a very solid effort with the usual Nightmare sound of crunchy guitar-driven slabs of metal. Overall, the band as a bit of a USPM feel to it more than the typical European style of metal with songs like Forbidden Tribe and Invoking Demons in particular having that feel. I have seen some mixed reviews on this album and don't want to compare really to what I have seen (which is why I generally avoid reading any other reviews ahead of time), but suffice it to say I would have to disagree with the more negative vibes here.

I think that this CD has plenty of chops and though Jo Amore's vocals seem a bit stretched in spots, I find myself really getting into the tunes on this album. Much of the album is catchy and the hooks can get quite intense at times. I Am Immortal, The Bridge Is Burning and Bringers Of No Man's Land all stand out as solid numbers as well as the aforementioned tracks. This is a CD that is definitely worth considering adding to your metal arsenal.