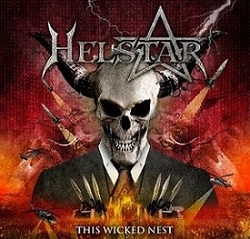 I have been really psyched to check this CD out since I first heard about it. Helstar has always been a personal favorite band of mine and James Rivera is one of the best vocalists in heavy metal, period. I have always wondered why Helstar has never gotten to the next level as I feel these guys hold there own against any of the big names in the business and the proof is in the incredible releases they have churned out over the years.

Rivera has an incredible voice that rivals the work of Halford and maybe even Dickinson as far as the screams go, and he can reign it in when needed as well. I heard him in concert doing some solo stuff last summer so I knew he still had it in him and this album is further proof of that fact as he has not lost any of his iconic vocals here.  The last couple of releases have been pretty stellar and with the same lineup for the last eight years, I didn't expect much difference here and they have definitely delievered on that in spades!!

With such killer cuts as Eternal Black, This Wicked Nest, It Has Risen and Fall Of Dominion among others, Helstar has further added some great music to their already loaded arsenal of music to pull from. It will be interesting this summer to see what they work into their live show from this album as there are a few cuts I would definitely like to check out.

After a bit of a hiccup in the mid 90's when the band admittedly needed to recharge their batteries during the dark days of metal, Helstar has come back and been on the top of their game for a decade. It still amazes me how only the diehard fans are familiar with this band as to me they should really be juggernauts in the industry!

This Wicked Nest is a truly Wicked release!!