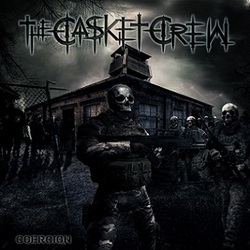 
If you like your thrash dark, dirty and vehemently vicious, look no further than the nearly deathlike thrash renderings of Denver's Casket Crew. The band has released three full length CDs now in their nearly 15 year career, though they seem to be having a surge of sorts particularly in the last few years or so.

I would say overall the music here is pretty much modern thrash, closer to the Slayer or German thrash scene than anything from the Bay Area with a very nasty vocal delivery by James Rodrock. It definitely hovers in the deathy area a bit. The subject matter is the usual areas of thrash: drinking, evil, war, current events etc., and the production is decent if not mind blowing...but then again too much production would definitely take away from their raw sound a bit.

Despite the raw and gritty style of metal here, there is some areas where the tracks do get stuck in your head. The chorus of They Live, We Sleep for example is downright infectious and is a definite highlight on the CD. The band also don't get tiresome with their songwriting either. There are elements of other aspects of metal to be found sprinkled all over the CD, take for example the almost doom-like qualities of Funeral Dirge.  At his point you notice the continued clean backing vocals that are hauntingly just in the background a bit from the main vocals, giving the band a bit of depth that is unexpected and very fresh.

The beginning of the CD doesn't exactly floor me but things REALLY start happening around track number three and then my head rips itself off my neck and begins to move on it's own accord! The entire middle of the CD is moshworthy madness and really I can't say enough about it for that matter. Watery Graves is red hot and Dethanol has a sort of deathy industrial tone to it which is hard to explain.

At only eight songs it feels a bit short and not sure if that is good or bad. Definitely could've used another solid track or two, but if they left off the filler, then no harm done. Overall a very nice thrash effort and I definitely need to track down the back catalog! Bring out your dead, the Casket Crew are here to gather them up!!