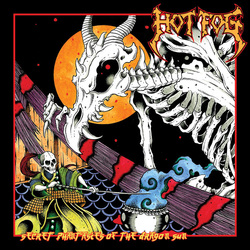 Stormspell Records, 2014
1. Dawn Of The Falconer
2. Epoch Of The Tyrant
3. Secret Phantasies Of The Dragon Sun
4. Tonight! (In The Night!)
5. Priest Of The Hillpeople
6. Agamemnon's Gambit
7. By Sanity Denied
8. Sword Mountain

Hot Fog are a new band of bay area veterans who have come together to unite in battle against the mighty fantastic hordes that....okay they have united to form a pretty cool and distinctive New Wave Of Traditional Heavy Metal band that is both in the veins of a Slough Feg or Manilla Road but at the same time quite their own distinct little animal. The roots are there with a harkening back to everything from Budgie to UFO to Uriah Heep to Priest and Sabbath, but they have found their own way of weaving all the sights and sounds together into this interesting new dynamic.

Secret Phantasies Of The Dragon Sun is their first full length effort after a cleverly titled EP called Wyvern and Children First and we have a pretty intense eight track CD that defies regularly labeling and brings forth a pretty epic sounding blitz of metal. The guitars really scream at you here with some great soloing and some killer riffs that really get you into the music. The vocals are very well done as well and I can't find any major faults with the music here at all. A couple tracks are a bit better than others but there is no real weak spots either. Each track has something to say and a voice with which to say it.

The subject matter is pretty much standard fare for an epic band such as this, though the occasional tongue in cheek lyric or title. But then again I don't think they were going for anything else and why should they, this CD is hella-fun! I mean just look at the comical album artwork with the big undead dragon and skeletons all about, how fun is that?

I dare you to listen to Tonight! (In The Night!) and not bang your head and pump your fist! While you are at it, check out the rest of the CD and become a fan, I know I have!!