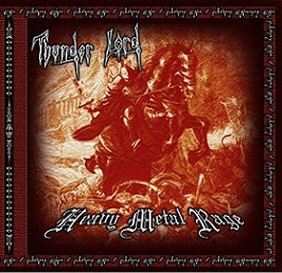 
Combining a variety of metal influences in genres such as traditional, speed and thrash metal, Chile's Thunder Lord have their second album ready to go. Their sound has stabilized a bit as has their lineup which has seen some transitions over the years. With such bands ranging from Exciter and Sodom to Grave Digger, Running Wild and Blind Guardian to draw from, the foursome have put out a pretty solid album as they are preparing to make a statement to the metal community.

Musically the band is pretty good overall. Nothing very cutting edge here, but these guys are one of the many bands out there that are going for that old school feel and that pretty much means they are sticking true to the metal roots, which there is nothing wrong with that. That particular new wave of retro metal is indeed getting very crowded and it is much tougher for bands to really break free and really stand on their own and I am not quite sure these guys have what it takes at this point to be leaders of the pack. They are good but there are a lot of talented bands going for the same sound.

There are some killer cuts on here such as Dark Rider, Crusaders, Steel In Battle, Mithrandir and Heavy Metal Rage (and some of the other tracks have their own merit as well), and the band definitely have some talented musicians who put out some pretty solid licks. The production is adequate if not quite up to standards and the vocals are a bit thick for my taste but all in all a solid effort. I just don't think they are quite ready to stand side by side with the fore runners of metal....yet.

A nice CD but nothing earth shaking here.