Polaris - Dawn Of The Last Day 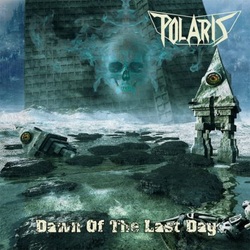 
This German four-piece has been together for a decade before they finally released their debut full length studio effort. This effort was proceeded by a couple of demos and an actual live offering, before they hit the studio for their first real attempt at a release.

The production is not bad really as overall the instruments come over quite well, though the drums are mildly tinny it is a minor issue. For a self-released album on probably a pretty small budget I am guessing, it is a really solid offering. The artwork likewise is rather suiting with a dark vibe to it.

Musically the band seem to be a pretty straight forward thrash band with maybe a slight nod to the US bands over their grittier country mates. I sense a bit more bay area in general here than I do any Sodom or Kreator for example. Either way though it is all mosh-worthy and you get plenty of headbang for your buck with this CD.

I would have to say that some of the more stand out tracks would include Deserting Fate, Fire From The Sky, Wanderers In The Mist, Pirates Of Thrash, Immolation Of The Dead and maybe Evolutions End as well. The riffs are pretty much a dominant factor on the album here as the music is pretty much guitar driven, but Alexander Linda's vocals are also a key ingredient as well.

Let's just hope we don't have to wait another 10 years for the next offering as I am looking forward to seeing what Polaris has to show us next!