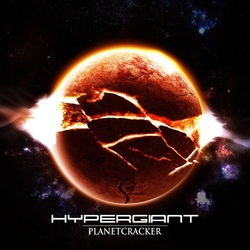 
1. Not sure what is going on in Australia lately, but I am stumbling upon a lot of really good music down there lately. Based out of Sydney, Hypergiant are labeled a progressive stoner metal band, and I guess that pretty much sums up their style. The stoner elements are at the forefront, and there is no denying a definite Orange Goblin kind of feel here, but they also bring in a bit more experimental bits to the overall sound, making a very spaced out mind trip.

The vocals take a bit getting used to as they sound more fitting for a groovier southern style sludge metal than the stoner sound that the band really seems to be going for. That being said, Swamproot is a really great track that works well. The guitar and bass are both ripping and production is good though can be tweaked just a bit to really give the band that rich fuzzed out sound a bit more.

The songs themselves are really solid with Rookwood Lurch being one of the highlights here. The title track is definitely a fun track and as I said earlier Swamproot is a really solid bluesy and has a strange sort of down home feel to it.  Finally, Shitwizard is the longest track on the CD, but the band does reign it in at less than 8 minutes which makes it still much more playable than had they gone on with an epic to close out the EP. The song is fun and humorously titled yet at the same time, screams stoner metal.

Overall it is a very good debut EP and makes me really want to see what they can do with a full length release. In a country that is giving us a lot of metal to take in lately, Hypergiant are definitely ones to keep a close eye on! Points off for being a EP and teasing me with just four songs!