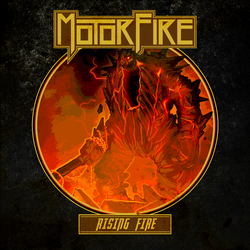 If a poll was taken to see what band has had the most influence on the modern generation, unquestionably Iron Maiden would be near the top of the list. Coming out of Slovenia we have the latest of the many traditional bands that have been peppering the scene from literally all over the globe.

Besides Maiden, Motorfire seem to be influenced by the hard rock spectrum with a hint of some glam even as shown on The Pride, but for the most part there is a lot of NWOBHM vibe going on here. Don't get me wrong, I have absolutely nothing against glam (the ballad I Miss You for example is one of the better ballads that I have heard in a long time) and the little bit they sprinkle in here works very well with the overall package, though that particular track isn't one of the better ones here.

For that, definitely check out Burnout and Motorfire as those tracks are raging storms of metal goodness! No the lyrics are not mindblowing and the subject matter is not much of a leap for this type of band, but they were not out trying to reinvent the wheel, they were just out to burn the rubber off of it and in that I think they succeeded nicely.

I can't end the review without talking about the track Motorfire, which is definitely the band's anthem and it really smokes! Definitely along with Burnout it is the standout track on the album. Other good tracks I should mention would be Ghost Rider, Claws'n'Fangs and Night Version, but the whole CD is listenable and there isn't really much in the way of filler here.

As good as this album is, I have a feeling they are still working into their sound and that things are really going to take shape on their next album!! Definitely a band to keep an eye on here!! The 'Fire is indeed on the Rise!!!