Ninth Circle - Legions Of The Brave 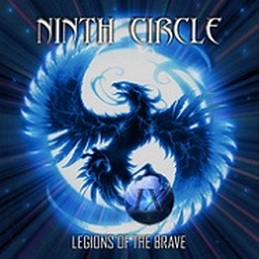 This is the third full length CD from Los Angeles based Ninth Circle, and the first one that is put out by a label. I am not familiar with the first two CDs, but this one is pretty much melodic hard rock over all. It is labeled as power metal and I am not sure if the ones prior to it were closer to that label, but there isn't a whole lot of power metal to be found here (with the exception of maybe the title track and one or two others).

Before you stop reading though, let me add that what you do have here is some pretty slick music that is worthy of attention. Sure there are some modern elements at times (particularly in the vocals) which took a bit to get used to, but there is no denying the talent and skills involved in making this album either.

The hard rock is melodic and fluid and showcased well in such tracks as After The Rain, All Or Nothing and the majestic Arcturus Rising, Part 2. Meanwhile tracks such as The Quickening, Legions Of The Brave and Grinding The Bastards Down show the heavier elements of the band that keep Ninth Circle in the metal spectrum. Even melodic quasi-ballads such as Going Home have so much to offer. The cover of Deep Purple's Stormbringer is particularly satisfying.

Without hearing the first two albums to know for sure, I have to think this CD is a major step forward for the band both with quality and maturing of the songwriting and Ninth Circle are about to make a decent splash on the metal underground.