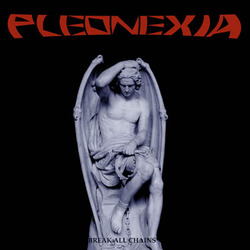 
Hailing from Turin, Italy, Plenexia brings us their debut full length slab in Break All Chains. This is a very fitting title for a very unique album that does indeed "Break All Chains". It is nearly impossible to pigeon hole this band into one genre. There is some definite straight up metal as well as some hard rock elements all involved, all delivered with an epic zest. They really have forged their own style here and don't really sound like anyone else. The closest they come to is an 80's style metal rock band ala Scorpions, Dokken, Krokus, etc but at the same time they don't sound like any of them. They call themselves philosophical metal and for a lack of a better name that works well for me.

From the first notes of the opening track Pleonexia you realize you are about to hit uncharted waters here and whether or not you like what they do you have to give them props for being creative in the songwriting. Not only is it creative for the sake of something new, it is infectious and maybe a bit over the top, but it works and works well! I Don't Care is stuck in my head and I can't shake it!

No two songs sound anything alike on this CD and not all of it can really be called metal as there is some modern rock, AOR and various other sounds and influences included as well making it a very rich and rewarding, not to mention ambitious project!

After several repeat listens I am constantly catching something new and different that escaped me the first couple times through this CD. That is a good thing as it allows for a lot of replayability which is hard to come by these days.

If you want to delve into something new and different you need look no further than this CD. Now go and break the chains that are holding you back!