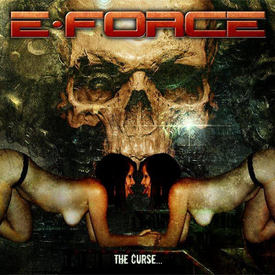 
E-Force is an angry thrash band out of Canada that have been tearing up the scene for closing in on 15 years now. They may not be the most prolific band, with three full length CDs to their credit (about one every five years or so), but they do make some pretty vicious thrash metal when they do record.

The band is spearheaded by former Voivod vocalist Eric Forrest and he has kept himself busy in other projects which may be a good reason why this band hasn't written more. The drummer and guitarist are likewise keeping themselves busy with their various projects as well, but the trio finally have found some time to put together this concept album that is a sort of tribute to the temptations of the fairer sex. The band is joined by several guest musicians as well including Glen Drover of Megadeth and King Diamond fame.

The music itself is extremely thrashy with some very gruff vocals out of Eric Forrest which are a bit cutting and almost deathy in feel. There is very little melody here, just straight up hammering vocals layered over some pretty sweet guitar bits and some sick drumming.  The production of this CD is really top notch as well.

There are some pretty cool tunes on this CD including Awakened, Infexxxous, Mass Deception and Psyclone and you gotta give a nod to the direct slap in the face nature of a song called The Curse Of The Cunt. A rather amusing concept album and I give them some props for originality here.

Overall, I really wanted to enjoy this CD, but the vocals are just way to screamy and growly and too distracting to keep me from enjoying the music itself, which is pretty slick.