Sioux - The One And The Many 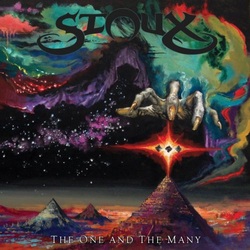 
Sioux are an interesting new band from the Portland, Oregon area and have released an EP and now a full length (though only 6 track) CD in their short two plus year career. They bring in a sludgy, doomy and trippy stoner vibe to the table. The sound is raw and stripped down which probably adds to the atmosphere of the music.

Let In The Night is the first track and it is a very psychedelic ride and sets the table for the rest of the CD. The true enjoyment of the CD begins, though with the very cool and memorable Faithless, an outstanding track that doesn't get tiring after repeated listens. Ad Astra continues right on where Faithless left off and it really helps keep the album's momentum going forward, being nearly as impressive as it's predecessor.  The One And The Many is a bit of a sleepy acid trip ride which showcases another side of the band's sound. Ascension is another spacy trek that just doesn't quite do the same justice to the album as the other tracks do, but Scapegoat comes in and ends the CD on a high note.

Sludgy doom metal is a bit tricky for me. I like some of it a lot, but other times I am left scratching my head a bit. Sioux is fortunately in the former and not in the latter category as I am pretty happy with this CD. I just wish there was more of it to be had as six tracks seems a bit too short for me.