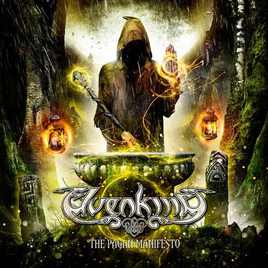 AFM Records, 2014
1. The Manifesto
2. King Of The Elves
3. Elvenlegions
4. The Druid Ritual Of Oak
5. Moonbeam Stone Circle
6. The Solitaire
7. Towards The Shores
8. Pagan Revolution
9. Grandier's Funeral Pyre
10. Twilight Of Magic
11. Black Roses For The Wicked One
12. Witches Gather

After eight albums to their credit now, Italy's Elvenking have quickly been establishing themselves as one of the forerunners of the folk metal scene. On this CD they pull no punches and whether its the folksy power of lead single Elvenlegions or the ballad sounds of Towards The Shores or the full on folk attack of Moonbeam Stone Circle, they are dedicated to really show they are ready to deliver on all counts.

Yeah Elvenking is a bit on the cheesy side at times and the cheese still rises to the top a bit on this CD, but that is to be expected in the style of music and their cheese has a certain amount of innocent charm to it. What do you expect with such titles as Druid Ritual Of Oak or King Of The Elves? Folk metal is not meant to be taken seriously anyway, it is sheer unadulterated fun, pure and simple.

I would say if I were to gripe a bit about this CD, I would say my two biggest complaints are the mix and the safe feel of the album. First off the mix is a bit perplexing as we start off with a nearly 13 minute epic track after the obligatory intro. This does not make it easy to really get into this album right away as a shorter uptempo track would work much better here. Secondly a few of the tracks just sort of are there without being completely smoking as they could be. The aforementioned The Druid Ritual Of Oak is a good example here of a track that has a ton of potential but just falls a bit short.

Still overall not a very shabby release by any means and naysayers stand aside for I enjoyed this CD and had a lot of fun listening to it, what more could you ask for??