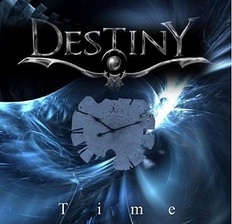 
Okay every once in awhile I come across a CD that is just so much better than it has every right to be. Everything seemingly should go against this band to be able
to put out such an effort as this release. First off it is the band's first release after only being together for about a year. Secondly the band hails from Costa Rica, hardly known as an epicenter for heavy metal. Also the band is independent and we have a very well-produced, professional sounding release that  sounds like it could come from one of the many second tier record labels.

What you get here are seven tracks of very majestic and beautifully performed power metal that would do any of the European bands proud. To be honest this band just screams out as a band that would come from Europe, and a veteran band at that! Fallen Angel and Time are just a couple of their incredible selections on this CD and I dare you to not enjoy the very sweet cover of Helloween's I Want Out. The band uses some quasi-growling vocals as well but they are minimal and done to enhance the sweeping melodies that are scattered throughout the CD and go along way towards giving this entire journey an epic flair.

Helloween is a good comparison throughout the CD as would be a Blind Guardian and maybe a Symphony X or Stratovarius as well, they are that talented. My biggest complaint is I could stand to see one or two more tracks on here to round things out a bit as seven tracks is a bit of a tease. I am not going to complain however as this CD is pretty dang flawless and compares pretty well to anything else that has come out this year.

Our Destiny is here and Time is of the essence, so you need to check this band out now!