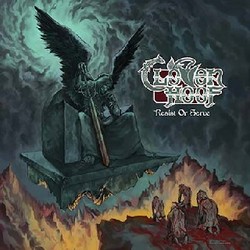 
Album number six by cult UK metalheads Cloven Hoof and the band has taken another step further into the land of power metal and moved further away from the roots of the NWOBHM which birthed them. They still have the basics all there but are really moving into a more modern traditional vibe to their music. This is their first album since their "reset button" of re-recordings came out six years ago and it is a very rocking effort.

Despite their longevity, they are still not as well known as they should be, having been a pretty significant threat during the NWOBHM era, they continued forward in relative obscurity save for the diehard fans, which is a crying shame if you ask me.

The CD begins with Call Of The Dark Ones which is a pretty cool opening track that has the true metal vibe all over it. Hell Diver is a head banger that helps to keep things moving along and is a great lead in to Deliverance which has a bit of a unique feel to it. Then you throw in tracks such as Premature Burial, Mutilator, Cycle Of Hate and Northwind To Valhalla and you have a slew of excellent tracks worthy of anyone's playlist.

There are a couple of tracks on here that I think are a bit weaker than the others, but that is few and far between and I hope we don't have to wait another six years for another full effort. Resist or Serve? I don't think I can resist this one!