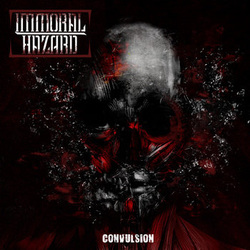 
Convulsion is the debut release from this Thessalonian heavy/thrash outfit. The band have been around for a few years now and it seems they prefer a pretty dark image of metal compared to many of their country mates who seem to focus more on the mythological or fantastic bend of music. Immoral Hazard have elements of bay area thrash as well as German thrash and some more traditional pseudo-power styles mixed in. I get a vibe of Megadeth meets Sodom in a lot of the music here for the most part.

Pitch Black starts the album off and it doesn't pull any punches. Right from the beginning you know what to expect throughout the CD. Uncompromising and in your face metal. Reborn comes on and just picks it up to the next level as it is in my opinion a bit of a stronger track. By the time Self Enemy hits your speakers, you know that there is not going to be a tremendous amount of variety here. The band are all about unleashing the full frontal assault and pick up the pieces after.

But then they throw you the curveball with Vultures Dance. Just when you think you have them figured it they change it up. This song starts with a slower tempo and keeps to a mid level tempo throughout. The track is hooky and rather enjoyable, making a nice change of pace before the tempo goes full on again with Mentors, which is also a solid cut. The whiplash hits you with the slow tempo of Dead End Trails. This track starts cool and I expected to dig it but it just unfortunately seems to have missed the mark a bit and I just can't seem to get into it despite several listens.

Things get much better when Alcowhore storms in, with its very strong Metallica sound to it. This is the definite stand out on the album and an anthem the band could wrap a live show around for years to come!  Haven and Last Nerve are a couple of decent tracks to finish things up with.

Solid metal with a serious attitude. Definitely give this CD more than a passing consideration, prepare yourself for the Convuslsions!!