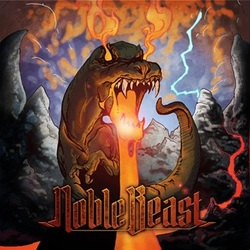 Tridroid Records, 2014
1. Iron Clad Angels
2. Behold The Face Of Your Enemy
3. Master Of Depravity
4. The Dragon Reborn
5. We Burn
6. The Noble Beast
7. Peeling Back The Veil
8. Disintegrating Force
9. On Wings Of Steel
10. Nothing To Repent


I have been anticipating the release of Minnesota natives Noble Beast for some time now since I heard some of the demos and saw the band perform live. The CD does not disappoint, in fact I was not prepared for the magnitude of the killer release! This is an incredible release of masterful epic heavy metal. Great production, great songwriting and some incredibly well-done songcrafting all combine to make this one of the definitely surprise highlights of a promising year for heavy metal!!

With instant classics such as Iron Clad Angels, Behold The Face Of Your Enemy, Peeling Back The Veil and On Wings Of Steel, this CD is going to get some repeated listens in plenty of car stereos and ipods all over the place. Combining some great guitar work in both riffs and solos and some majestic vocals that emanate both melody and power to equal levels, the music is definitely living up to the name "Epic".

I could go on and on and tell you that you must get this CD. I could say it is a one of a kind masterpiece in the truest sense of the word. I could go into the details and nuances of why it just works, but I have learned that actions speak louder than words. Just go check it out and if you have a craving or interest in epic metal then you will really enjoy this. Words speak loudly but Noble Beast's self-titled juggernaut speaks much louder!

Rarely has a band come out of the gates dropping the hammer on such a powerful debut. Some really great bands have done so and went on to some rather lengthy careers. Other bands have put out an incredible tour de force but quickly faded into oblivion, never to be seen again due to either  infighting or bad circumstances (or possibly they were just one trick ponies?) I really hope that Noble Beast will continue the momentum that this CD will garner for them and carry on to have an excellent career. They definitely have the talent and the chops to see that happen, now lets hope fate smiles upon them!!