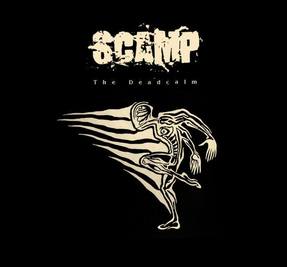 
Brutal and angry. That is the best way to describe Scamp and their second full length album The Deadcalm. These Danish metalheads bring in a very violent and grim style of modern thrash and groove. I am not familiar with their first album to know if that one reeks of venom and hatred as well or if this is a change in attitude and swagger from this younger band.

At first listen I realize that this CD is a bit more modern sounding than a lot of what I listen to. It's listed as thrash/groove but is more of a modern post thrash vibe to it than anything, but there are still quite a bit on this CD that I found enjoyable to listen to. The Boys From Dead Soul Road, Adrian Silent Inferno and No Surrender in particularly stand out to me as they incorporate a bit more thrashiness into the mix.

The long and the short of it is that the CD may have a bit more of a modern and aggressive edge (I will not use those modern labels as I don't want to pigeonhole this band), but still has something to offer the traditional fan. If you are open minded, give it a shot!

There is no calm in The Deadcalm, get your anger on!!