Project Arcadia - A Time Of Changes 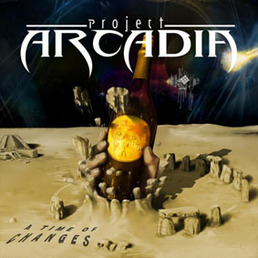 
When I first heard this CD I thought it was good. After a second listen I thought it was really good and after a third listen I realized it was just plain fantastic. The first thing that struck me with this was the vocals as even though the band is from Bulgaria and they definitely play some melodic power metal music, the singer just made me thing of Swedish metal and I couldn't place it, though his sound was familiar.

If I am listening to a band or CD for the first time and plan on doing a review of it, I generally avoid checking out the band lineup or history or anything else to get as much of an objective view on it that I can, so when I looked on the lineup and saw the band featured none other than Swedish vocal juggernaut Urban Breed (of Tad Morose, Pyramaze and Bloodbound). Urban has one of the most underrated voices in the industry as he has so much soul in his voice it's a crime. Yet at the same time he can belt out some power when needed.

Musically there is a mixture of the bluesy Scorpions, MSG,  Badlands style of hard rock as well as some of the Swedish melopower to be found here as one would expect with Breed singing. However the musical skills of guitarist Villy Neshev (formerly of Rampart and currently with F.A.C.E.) go a long way towards that final sound as well. For those who are not familiar with Villy, check out some of his other projects!

Plamen Uzunov (guitars), Dobromir Paraskov (bass) and Daniel Dimitrov (drums), rounds out the cast of talented musicians that forged this rather titanic of releases. This is their second album, though there has been a lot of changes in band members since the 2009 debut so I am not sure how much the sound may have changed (with both Villy and Urban joining since then), and I am not sure how committed everyone is to making this a regular band or just an occasional project, but if it were to be a primary focus by the members I could see this band become a powerhouse force on the European scene for years to come!!