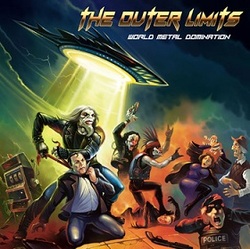 
StormSpell Records has done it again. They keep throwing these releases out there in a pretty rapid clip. Usually when you see that by a record label, you will get a good amount of average to weak metal, but not only is StormSpell releasing them in quantity, the quality is really high as well. Take this Bulgarian thrash album for example.

The album is a debut from this five-piece band of veteran musicians and they have been around for a handful of years now before releasing their titanic debut album. What you get here is a solid eight tracks of bone-breaking, riff-heavy, aggressive grade A thrash metal. In a world full of thrash metal there is a lot of really average thrash out there right now, and then there are bands like The Outer Limits full of energy, vitality and a willingness to show the old warhorses a thing or two.

The production is very crisp allowing every riff and every shouted vocal and solo to come forward giving a very deep and rich sound without sounding over-produced and phony. Lyrical content and artwork are what you would expect from a thrash band and the song compositions are not a leap in any new direction really, but everything is done very well and though this CD doesn't forge new territory, it definitely improves the familiar roadways you have trodden before.

Just check out tracks like The Outer Limits, Bonded By Metal, Living In Your Nightmare, Suicide or Hate Machine and you will understand completely.

It may be too soon to say The Outer Limits have reached World Metal Domination, but the initial assault is definitely under way!!