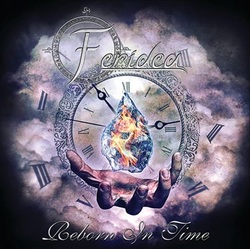 
Here we have the debut EP from Finland's new symphonic power metal group, Feridea. These four guys and a girl have been together a mere two years now and have already merged themselves into a very gripping and engaging form of music that is what you expect for this type of music...over the top production and a major focus on the technical aspects of the music itself.

To be honest, the idea of starting a CD with a three minute instrumental and following it up with a thirteen minute epic is a bit rough for a new listener to really check out the band. That is a lot for one to soak in to get a feel for the band. A short intro followed by a shorter track to wet the appetite might have been the way to go. With Fire And Frost with its drum roll intro may well have served as a better beginning.

That being said, for those who do stick around to check out the whole picture, they will see that the band can deliver the goods and part of that is definitely a credit to Heidi Mankinen who adeptly takes center stage with a very strong voice, as shown on the aforementioned With Fire And Frost. The rest of the band are by no means just along for the ride as these guys are very talented and I am anxiously awaiting to see a full length release by this Finnish group.

Overall not a bad four-track EP (almost could call it a full length as it is over 30 minutes long). A few things that bug me primarily with the song mix, but otherwise a great first step for a band that is definitely worth keeping an eye on!