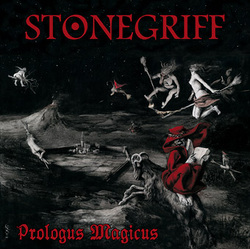 
For nearly five years, Sweden's Stonegriff has been honing their skills and getting ready to deliver us their own rendition of traditional doom to build their own legacy on. Their niche is very old school Candlemass/Pentagram/Sabbath with a leaning more towards the heaviness of Sabbath. The guitars are fuzzy with a subtle sort of power behind them and the vocals are very unique and distinct at the same time. The higher pitched screams at times do need to be tempered a bit as they take awhile to grown on you.

This CD encompasses eight tracks that are brooding, dark, ominous and foreboding. The album artwork is very doomy and helps to set the mood here. Stonegriff have shown they are students of the genre and with the assist of some pretty solid production behind them they have given you a pretty darn good final exam in Prolugus Magicus.

Tracks such as Black Magic Circle, Secrets Of Your Soul, For Madmen Only and Devil's Daughter really shine through and bring forth the restrained madness (no pun intended) here. Other cool tracks would include In The World That You Rule, Impossible and Black Snow as well, so there is plenty to choose from here to use as your soundtrack to the apocalypse.

Epic old school doom is alive and well in Sweden; that may sound like an oxymoron, but if you check out this CD you would probably agree!