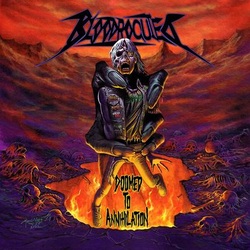 Self-Released, 2013
1. Doomed To Annihilation
2. Violent Vortex
3. Venom Of Hate
4. Whispering Death
5. Excision Of The Past
6. Screams At Night
7. War Chronicles
8. A Genocide Awaits


The modern thrash revolution is definitely a worldwide movement. One of the more recent additions to the growing army of headbangers comes out of Belgium. This younger band plays a fast paced, no compromising, no frills sort of blue collar version of thrash metal as can be seen on this, their debut release! Don't expect too much in the way of originality here, and that is pretty intentional on the band's part. To be honest I do love all the new thrash bands that have sprouted up all over, keeping in mind that they are not created equally. The style is just a throwback to the way things were back in the day and I do not have a problem with that!

Now that I have that out of the way it is time to focus on Bloodrocuted. The music on this CD is solid if a bit unspectacular overall. Definitely worthy of a mosh pit adventure and the banging of your head while your fist is pumping in the air while the band plays on at a pretty much full gallop. The CD is a solid first effort and there is a lot of untapped potential in this band. In particular the riffing really sticks out and with a few more additional elements the band can really deliver a full package at the listeners.

There are some really solid highlights on this CD such as Violent Vortex, Excision Of The Past, Screams At Night (I really dig the song intro here) and A Genocide Awaits. I think the album gets better the deeper you go into it as if the band becomes more comfortable in their songwriting as the CD goes on (not sure if the mix reflects the order the songs were written or not but that is just what I get from a few listens).

A solid first go at it and with a bit more maturity in the songwriting and maybe incorporating a few more things such as some classic gang vocals here to accentuate the vocals a bit and maybe tossing in a melodic slower speed hook or two to shake things up a bit will make a big difference as this band moves forward with their very career!