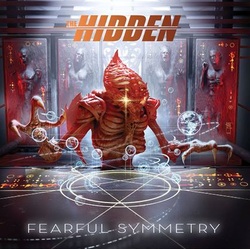 The Hidden have been around since the 90s, but this is their first real release. This Swedish thrash band features past and present members of such bands as F.K.U., Loch Vostok, Dark Funeral and Wuthering Heights, so there is definitely a large amount of experience contained here. Together they form a very angry and intense metal outfit singing about serial killers, death, anti-posers and all things macabre.

The music is good, though I feel the production is off a bit especially when it comes to the vocals. Some of the tracks seem to lose Teddy Moller a bit in the mix and that is unfortunate as he has a strong voice for seeing this style. The guitars are really crisp and chunky but they tend to drown him out in some places.  The riifs are just plain sick and to say this is a guitar-heavy album would be a gross understatement, but at times it does take away from the bass which is also a bit thin.

In particular I think the CD starts out good with Cut Your Wrists (Bleed You Poser) and the Jeffrey Dahmer track N. 25th St. Apt. 213 showcasing both what to expect both in their music and their message. Other highlights would include Far Beyond Us and Rager/Reaper as well as Unstoppable Apocalypse (which is probably my favorite track on the album).

Overall a pretty decent effort though a bit uneven in production and some of the tracks seem to hit better than others do. Give it a listen and decide for yourselves on this one.