NoLand - No One Is Nowhere 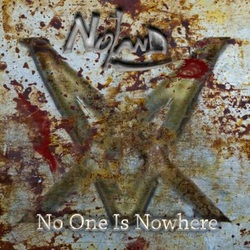 
NoLand is a one man project done by Midian's Gianluca Bertolini. This is the debut album by this multi-talented Italian musicians new project and it is a blistering assault of nonstop thrash! Very dark and raw, with just enough production to get by, the music is reminiscent of Teutonic bands with a  smattering of death thrown in for good measure.

The tracks are short and to the point, rarely reaching the four minute mark (only Dominator sneaks past that in length), buzzing brightly and ripping your guts out before moving aside and letting the next one beat your skull in! There is no finesse to be found here, nor is there really any plan for it. The first couple tracks come and go and don't really grab me too much, but then the meat of the album starts to chime in. Tracks such as Wolf and Seed Of Evil are the album's linchpins. The riffing is a bit more pronounced and there is enough hook in the music on these couple of tracks to grab you and really invest you into the music.

The tail end of the album features a pretty nifty cover of the Motor City Madman's classic Cat Scratch Fever and a couple of curiously titled but very good songs in Cronoscalate and Possection Of Life to end things on a cheerfully dreary manner!

Overall a valiant effort with some strong tracks on here but maybe just a bit too angry for me in general. Love the tunes, the vocals are not for me.