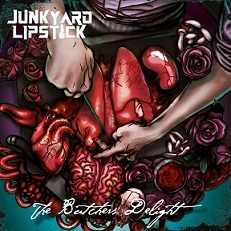 Junkyard Lipstick is an all-girl band from South Africa that began as a punk band in 2011. After a debut album came out in 2013, the band followed it up with this six-track EP in 2014. There is still a very strong punk vibe in the music, the lyrical content and even the production level of the music. The punk, give no shit attitude is still very obvious. On top of this they have fused some thrashy metal and hard rock undertones.

As I mentioned the production is a bit on the low side and could stand to be amped up a bit to compete with the multitudes of bands that are out there now, especially if they want to break out of the confines of the metal wasteland that is South Africa and make a name for themselves with the rest of the world.

Bioterror and Size Zero Death Match are your typical punky thrash tracks that you would expect from a band with this background. The Butcher's Delight on the other hand starts out with a very cool intro and is a bit different from the rest of the album as far as musical style. I would really like to see the band to continue to explore this direction as it was sounding intriguing to be honest. Vocalist Tazz-O let loose with an incredible scream a couple different times on this track which almost sounded inhuman. If her vocals were a bit higher in the mix I think it would've been even more of an impact.

House Of The Holy likewise had an interesting hook to lead off the song after a short spoken introduction and uses some interesting lush harmonies to offset the shrieking of Tazz-O here. The CD ends on a very strong highspot with Protest & Pudding which has a very In This Moment or Otep feel to it!

Overall not a bad release and Junkyard Lipstick are making some definite strides with a direction they are working towards. A bit of a push on the production could see them go forward to make a bigger impact on the metal underground scene!