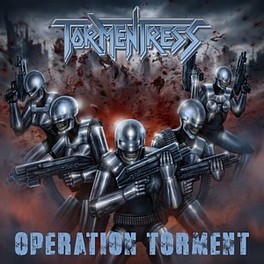 
An all-woman thrash band from Singapore and immediately you think novelty act at best, and chances are that would be right on the money. The thing is though, Tormentress do not see themselves as a novelty act and after giving this release a couple of listens I have to say that they have every reason to feel that way.

What we have here is the debut album from these very thrashtastic female musicians (and this will be the last time I mention they are female as they should not be treated any differently than any male musicians as they seriously bring the goods here). Expect a very raw and savage variation of old school thrashery in the veins of Kreator, Sodom and Slayer. The guitars are especially crunchy on this and headbanging is NOT an option here, it is a prerequisite!!

The vocals by Neez are very sick and evil for the most part, and though her range isn't great (at least not on this release), it is sufficient for the task at hand and really does go well with the razorblade attack of the guitars and the thundering of the incessant drumming. The Great Oppression is just one case of everything just working together nicely.

Seven Feet Under, Mutilator, Dead At 27 and No Remorse are other classic examples of just nicely done old school thrash, but feel free to pick out your own favorites. This is by no means a perfect album as there are some tracks that are definitely a bit weaker than the others and the production could use a bit of spit and polish, but that maybe that would actually diminish the final product in all honesty. Either way, there is plenty of good to be had on this evil nugget of metaldom.

Operation Torment is just further proof that good metal does not have any prejudices whether it is creed, nation, skin color or sex. Good metal is good metal and this is some damn good metal!