Vivid Remorse - Down To The Wire 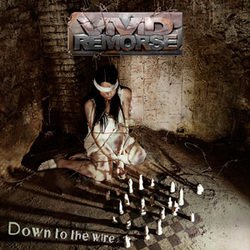 Spain's Vivid Remorse have been around for eight years now and play a pretty traditional thrash without the modern nuances or any of the groove or post thrash sound. Just what the doctor ordered here. The production level is a bit on the low end, and the mix sometimes seems to fade a bit, but overall there is a lot of fun headbangery here with some riffs that just slice you to pieces.

Vocalist Joel Repiso is overall pretty good but there are a few spots here and there when he goes for the high pitched shriek that his voice tends to lose it's sound and becomes more whiny which is at first a distraction and a detraction, but after a few listens you get used to it pretty quickly and is not as noticeable. In other words you do need to listen to this a couple times to get used to it, then it does a fine job of moshing for you.

Some tracks to check out would include Imaginary Actress, Theory Of Fear, Seize The Death, Nobody Answers and Overdosed. Also checkout Stop On Time as well. Overall not a bad thrash album, though it wouldn't be my first choice to grab when I want to get my headbang on, but definitely not a lemon either.