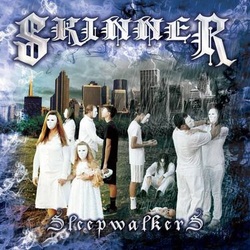 After checking out the video for the title track of this album before the release, I knew Norman Skinner had another outstanding release on his hands. Norman's output of fantastic metal releases is partly due to some really excellent musicians he has to work with, but also his incredible vocals of course!

After an initial EP release a couple years ago, there was a lot of promise for this band which bears Norman's namesake and with his various other projects there was some wonder if and when a full length album would see the light of day. Two years later it has arrived and I for one believe it was worth the wait!!

This particular offering sees Norman keeping his bloodcurdling high notes to a bit of a minimum, which is a bit of a contrast from his Hellscream release a few months back. Instead he for the most part focuses on the midstream singing which is a nice change of pace and helps to keep the various projects from sounding too similar (even though they are slight variations in genre with his vocals front and center they can tend to sound like the same band at times).

While the band makes sure to put the standout track out front (the title track is just fantastic), that doesn't mean the album drops off by any means. Orphans Of Liberty, Hell In My Hands and Blind Led Blind continue right along with some grade A metal moments, making the first half of the album something pretty special.

There are a couple tracks on the later half of the album that haven't totally grabbed me as of yet, but there are others that speak volumes such as Bound, Miss Agony and the very thrashy and slightly modern The Breathing Room.

The artwork is a bit cool and haunting at the same time and I can't finish this review without stating how outstanding the production quality of the CD is. Definitely a very solid and worthy addition to the Norman Skinner collection!