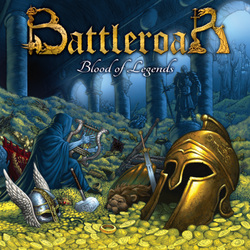 
After a very epic sounding intro, The Swords Are Drawn kicks in and there is no doubt that the Greek epic power metal group Battleroar are back after a lengthy delay from their last offering (2008's To Death And Beyond), and yeah the band has changed quite a few members, but now their fourth full length album shows that they may be tighter than ever ahd have not sacrificed any of their sound in the least.

The production is top notch and Battleroar have quickly reestablished themselves as one of the premiere bands to come out of their corner of the Mediterranean with this very epic anthem of heroes, legends, swords and battle! Touching on all things from the obvious Greek mythos to Nordic and medieval, the band continues to showcase their love affair with heavy metal, mythology and fantasy.

The CD as a whole is well welcomed and the music is really solid, though some of it seems to be missing out on some bombastic flare that may have been expected here, feeling a bit hesitant to really cut loose. Not sure if this is due to the new band members not quite sure of where they plan on going or not, but there just seems to be just a bit lacking.

Songs such as The Swords Are Drawn, Blood Of Legends, Valkyries Above Us, The Curse Of Medea and Exile Eternal do stand out as some of the better tracks on the album and though I would've liked a bit more of a epic feel overall, Battleroar are back and putting out new music and that is a good thing!