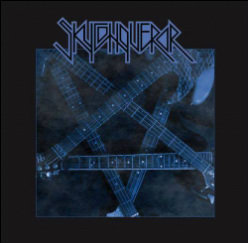 It's been a long road for Teutonic traditionalists in Skyconqueror as this is their second album in their 18 year history and first one in six year's after 2008's Hellstory debut. Influenced by the NWOBHM as well as everything from Deep Purple to Helloween to AC/DC to KISS, and with more than a little bit of occultism in their lyrical content, Skyconqueror craft a solid sound and presence and bring this forth to the metal community.

Under The Pentagram are a mid-range band that really do fit well in the traditional heavy metal spectrum, though they do not try to jump on the bandwagon of the New Wave Of Traditional Heavy Metal and prefer to try to fill their own niche as they take the hard rock 70's sort of feel as a base for their efforts and then build their sound from there. I get a sense of Scorpions here, some Deep Purple and even Mountain over there, even a flash of Doors and a dose of 80's thrash and even glam. It is an interesting mix.

The production is pretty solid overall, but seems to be lacking a bit here, just as the overall sound seems to be lacking a bit in intensity and energy. I believe they have the right idea here and I was really hoping to really get behind this album with full support, but at times it just sort of drags and doesn't quite kick in like I thought it would. It seems they were trying to play it safe a bit, sort of feeling like the cake was baked to perfection, but they forgot to put the frosting on it.

That said there is a lot of good moments on the CD with tracks such as Demon, Fallen Rainbow Warrior, Through Different Eyes, Horsemen Of The Grail and The Dusk as some of the more solid tracks on the album and definitely songs I will return to on a regular basis, but some of the other tracks were just missing that bit of oomph that I was waiting for here.

Overall a very solid album, but these days a lot of solid albums do get lost in the shuffle and I hope that doesn't happen here. Still definitely worth investing some time and money in if you like the bands that are influenced by the rocking 70's. I know I do!