Lions Of The South - Chronicles Of Aggression 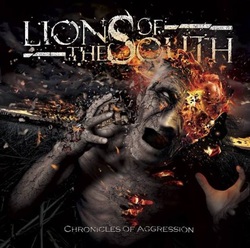 Lions Of The South are a Miami based modern thrash metal outfit and this is their very first release. By that I don't mean any of the really mainstream post-thrash crap but they are not really going for the retro vibe either.  The sound is pretty thick for a three piece band and the production is pretty sweet overall.

My initial walk through of the CD gave me an impression that they have all the pieces in place and some great potential of a really nice sound here, but the songs didn't really grab me as much as I was expecting they might. And after a few listens, I am still really waiting for it to kick in for me, but to be honest overall it leaves me a bit flat.

Individually Cristobal Perez does a good job on the vocals for the most part with some quasi Hetfield sounds as well as a few other thrash singers. I would really have liked to hear a bit more of a clean line here and there to keep the variety flowing, maybe that would have helped with the tedium sound a bit? The guitars are pretty good but can use a few more riffs as well.  The bass is pretty good, though there are times it gets lost behind the rest of the music a bit and the drums do sound nice and thick and tasty.

Don't get me wrong there are some tracks on here that stand out and I don't want it to seem all doom and gloom, but I might have had higher hopes on this one for some reason. It is their first album after all and there is a lot to enjoy on here, just not quite the blockbuster I was expecting.

The Lions may not have come out with a roar, but they are definitely not of the cowardly sort either!!