Verscythe - A Time Will Come 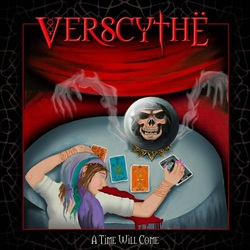 
Verscythe are a relatively new twin-guitar attack in the heavy/power metal genre and are based out of the New Bedord, Massachusetts area featuring brothers Jack St. Pierre and Justin St. Pierre on bass and vocals respectively, the guitar work of Chris Reed and Jeff Rull and Kevin Camille on drums. This is their debut album and they released it on their own last summer (2013). I have just stumbled upon them recently.

The first two things that struck me were the production quality and the songwriting. For an indy/self-released project the production quality is very crystal clear and rivals that which is put out by major labels, it is just really put together well and very worthy of a listen just for that factor. The songwriting is also that of some really experienced musicians as well. I researched further and saw that most of the band had actually worked together for years prior to Verscythe in a band called Kreagen, which also put out an album in 2008.

Justin St. Pierre has a really strong voice here. His vocals range from the tender emotional balladry to a deeper and more sinister growl that has more than a bit of a Hetfield feel to it. It works very well with the music that Verscythe crafts.  Generally the band is less power and more traditional but they fuse various elements from other genres as well. The ballad Wednesday's Rain is a combination of 80s MTV vibe with some more modern arrangements filtered in there. The vast majority of what they put out is a more mid tempo, quasi melodic power metal aural attack.

This Eternal War and Til The End Of Time are a couple examples of some of their more power metal level of music, though again they are more mid tempo and not the all out rager type. Justin keeps his vocals in check even as the band blazes on around him. Don't expect many Halfordian shrieks here, just very strong melodic vocals. Through The Soul is a very interesting song that just has to test Justin's endurance to the limit as there are long periods without rest for the vocals and then he does start to show his power during the second half of the song, really rather cool!

This is a really bad ass album that was a pleasure to stumble upon and I anxiously await to see any new music this five piece band puts out in the future, one of those very pleasant finds while sifting through all the refuse in metal these days!