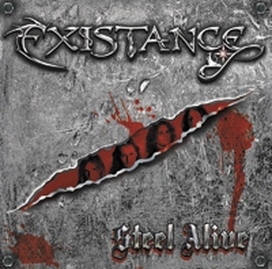 
Existance is a four-piece traditional metal out of France and this is their debut album. The band is relatively new, but sound like they have been together for quite some time and show a fair amount of maturity for a album debut. The style is very straightforward 80s vibe with a hint of power metal here and a heaping helping of old school hard rock. They hint at a bit of Swedish radio friendly melody and a fair amount of NWOBHM (and maybe a small homage to bands like Dokken as well).

The music is very guitar oriented with a strong amount of soloing and riffs that lead and direct the songs. The vocals are very solid and really give it the old school edge. The Siren really has the NWOBHM sound for instance going for it.  I would have to say though that they still need to work on that little extra hook to really grab the listener. The music is solid but a bit blue collar over most of the CD. The band has a ton of potential to being something really special and they just need to ignite the fuse a bit and really let it rip. Dead Or Alive comes really close to getting there as do a few others.

There really isn't a lot of filler in here per se, but neither is there a whole lot that sticks with you for any length of time, but I can feel the potential for the band to deliver a smash album as well. Burning Angel is another good example of Existance's abilities that show what the future may hold for them. Get Away uses some well done gang vocals to drive it along and this helps to carry the album through the bottom end of the CD and keep things interesting.

The further into the CD I am going the more I am digging the vocals of Julian Izard. Between his vocals and guitar work of Izard and Antoine Poiret layered on top of the rhythm section of Thomas Drouin and Alex Revillon (bass and drum respectively) and some really sweet production, I am really reliving my youth through the band. Close To The End and From Hell finish things off on a very high note. It's as if I just found an old vinyl long forgotten in the bottom of my closet for the last twenty or so years and dusted it off.

A goldmine of untapped potential, Steel Alive could well be the gateway that catapults Existance into being a tour de force on the metal scene for years to come!!