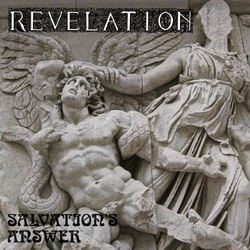 Revelation has been on the scene in Baltimore for a long time now and they have seven full length CDs to their credit. Savlation's Answer was the first of their progressive doom metal monstrosities that they have churned out in their nearly 30 year career. SKR decided to give us another shot of checking out the heavy groove of this bad boy.

The music is full of crunchy guitars and heavy drums with some pretty solid and moody vocals on top of it, but what it may really lack is some better production. The muddled mix keeps the music from totally shining out, which is unfortunate as there is some ripping good doom on this CD. The songs are interesting and varied and though they are labeled a progressive doom band the music doesn't become too lengthy and get stale at any point.

They mix in a lot of little nuances such as the bass intro to Paradox and the more traditional slowed down guitar tempos of the opening track Lost Innocence as a couple examples of the variety of tracks here. They don't fall into the trap of dirge guitar with bass overtones that many doom bands are notorious for giving them a different feel which may have made them ahead of their time a bit but gives them that unique edge.

A bit better production and this would have been a monster. Too bad they didn't just re-record the thing while they were at it (though I am guessing that kind of time or money investment was not on the table). Ahh well, still a very solid release!!