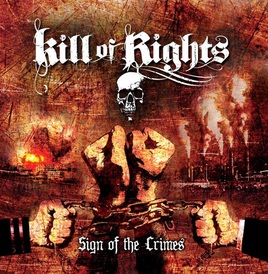 Kill Of Rights is a band that has been around for a few years now and have finally released their first CD. The band features Eddie Shahini of the cult icons DBC on guitar and there is some influence there layered on a blend of thrash and straight up heavy metal. Joining Shahini in this adventure is journeyman vocalist Jacques Dupuis who puts In a very spirited job of manic and frenzied vocal ministrations.

This CD is self-released but you can tell there is some experience in the band as the recording is very professionally done. Despite the aggressive and manic nature of the music, there is some melody, though it is usually pretty well masked behind a few layers of anger, venom and aggression. Despite all that, it doesn't seem as the band takes themselves too seriously. All in all a very enjoyable romp.

Songs such as Carnage and Buried Alive are incredible contagious and I dare you...no I double dare you to stand in one place after cranking those tracks up to eleven! If you can then you are clinically dead! One Way Out and Shadows In The Dark, though not as vibrant and charismatic as the aforementioned tracks are no slouches either. Black Gold is a bit quirky but still very enjoyable.

Ghost Town is another instant classic that got stuck in my head the first time I heard it, showing the disc wasn't just top heavy as the fun keeps going as you get deeper in the tracklist.  Right down to the last track, Kissed Goodbye there is some really topnotch musical entertainment to be found.

Though I may have personally trimmed one or two tracks from here that didn't quite stand with the others and kept it at a tighter ten or eleven track release, this CD has stuff that will appeal to crossover, punk, thrash and traditional metalheads all blended together with a good dose of humor thrown in the mix. Definitely creative and though sometimes a bit odd, don't let it throw you if you don't quite grasp it all the first time through. Let it ruminate and infect you from the inside first.