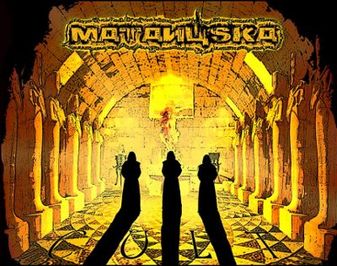 
Matanuska is a power trio of groovy heavy metal from the Aberdeen area of Scotland and this is their first full length release.

After a couple of listens through this CD I am left a bit puzzled with how to really categorize it. They are definitely laden with the groovy feel and vibe of the 90s but not quite to the intensity of the more common thrash/groove hybrid. The CD is almost feeling like it wants to be a stoner album but doesn't quite know how to settle down into it properly. Sort of Orange Goblin and Cathedral on a sugar rush and maybe a bit of Down on the side. Weirdly cool.

Songs such as Black Beetle and Falling From The Sky really feel like they are a speeded up Orange Goblin track to me, but then you have stuff like Electric Hell which feels a bit more Down-like. Either way the music is really cool with some solid production work done here to give a very nice package. One thing I can honestly say is the more I listened to this CD, the more I really got into it, in fact it is really seeming to leave a strong impression with me, which is a important factor for the long term success of a CD.

Besides the tracks I mentioned earlier there are a lot of golden nuggets to discover on this disc. The Wire and Killing The Man are both very strong tracks in their own rights and the same can be said of as well as March Of The Pig.

I think the vocals, though strong for the bulk of the CD, do sort of grate on you on some of the tracks. One particular song that rubs me the wrong way is Memento Mori with the strange vocal cadence which I find a bit grating to be honest. There are one or two other spots where the vocals sort of detract from the album, but on the rest of the CD the vocals are quite fine. Maybe if those couple tracks were eliminated this would be a much stronger album.

Overall, though, a very solid release with a band that has their own distinct sound. I would not turn down the opportunity to check out further music from this promising band from Scotland!